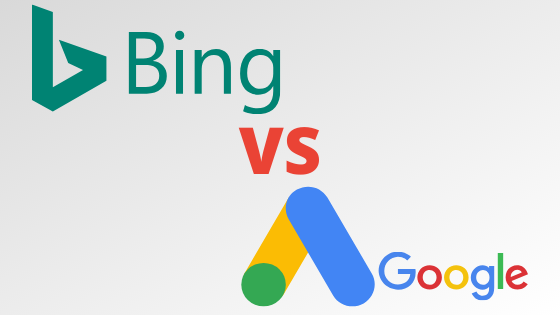 Bing Ads vs Google Ads has been a heated discussion recently in terms of rivalry between two platforms. But ultimately, the competition is not justifiable as Google leads the way all over.

What Makes This Rivalry Bing Ads vs Google Ads Such Fierce in This Marketing World?

So, let’s take a look at what keeps the pot boiling within these 2 PPC giants as far as marketing is concerned regarding:

How to Be Decisive Regarding Bing Ads vs Google Ads to Ensure Proper Marketing?

Here are the key advantages and disadvantages of both platforms and understanding the difference between the two, so that you can leverage from Bing Ads vs Google Ads battle for your overall search marketing PPC campaign strategy:

Initially, let’s start by looking at the difference in search volume on each of the networks. Undoubtedly, Google leads the chart when it comes to search volume with Bing not even closer. So, if you have an idea to campaign on Google Ads and you want to switch to Bing Ads, you’re going to see a drastic drop in volume, much likely one-tenth of what you’ll see on Google. Even though the difference in volume is massive, the only drawback that Google has is Traffic congestion, which might slow down the process of search at times.

As a business entity, it is undoubtedly one of the biggest concerns on how to pull off a good advertisement with the maximum reach in a limited budget. The average CPC on Google is typically a lot higher than they are on Bing, and the simple reason for that is competition. There a lot more businesses that want to spend money on Google Ads, and that is a crucial factor in determining the cost per click.

So, ultimately Google Ads is more expensive than Bing Ads, not just from the CPC point of view but also from a volume point of view, as mentioned earlier. So, you can spend a lot more money on Google Ads compared with Bing Ads, but again the advantage Bing has here is that cheaper click costs meaning the lower cost per conversion.

So, if you are generating traffic for the same search terms you are using on Google, and you get them over Bing a lot cheaper, then ultimately, you are improving the efficiencies of your overall search marketing strategy. So, the cost is the mere reason which will entice a person to opt for advertising on Bing Ads.

It’s seen a lot in specialization campaigns that Bing Ads topples Google Ads in terms of search, which determines less traffic, which leads to a high conversion rate at times. This brings up another argument that needs to be looked upon for resolving this quest of decision making for Bing Ads vs Google Ads. Now, there are quite a few perceptions regarding the conversion rates on Bing, at times being better than Google.

Some say it’s an older user demographic, meaning that probably got more money because Google hasn’t changed their default browser, which is questionable in itself. Not much is known as to why, but the speculation leads us to the conclusion that it’s because of age, which makes Google a bit outdated regarding the perspective of presentation.

Now, let’s explore the interfaces to address Bing Ads vs Google Ads. Bing Ads has thrived as a platform recently as compared to Google Ads, which has sustained for an extended period. Bing hasn’t had that much more learning time than Google regarding usage of the platform by people and how to make it more useful for the users.

Bing Ads, as a platform, can be quite slow and buggy, and it’s harder to reach things. In contrast, Google Ads is smooth, and the new interface introduction from Google last year adds to its capability, which ultimately leaves Bing Ads far behind. With the interface, the reporting of Bing Ads is not secure either as compared to Google Ads.

Lastly, the focus for Bing Ads vs Google Ads is customer support. When it’s an amateur advertiser or a small business entity that does not know professional marketing, it is essential to have proper support for the services. Bing Ads in terms of advisory, only entices advertisers to spend more money on the platform, without really addressing the core issue of the advertiser.

Just hope the dilemma of Bing Ads vs Google Ads has been thoroughly addressed, which will help you to pick one of them as per your requirements to display ads with a limited budget, which will attract many customers and serve you with good revenue.

Setting Marketing Objectives for your Business Older Post
How To Get Started With Digital Marketing for Startups in 2023? Newer Post

Our Spring Sale Has Started

You can see how this popup was set up in our step-by-step guide: https://wppopupmaker.com/guides/auto-opening-announcement-popups/